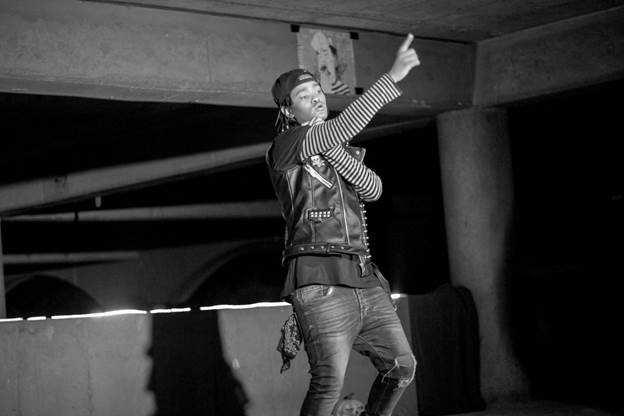 His braids curl up the sides of his head and he rarely touches his signature snapback cap to tuck them behind his ears. Two thin gold chains hang down his chest and his pensive look is omnipresent throughout our conversation.

Aside from him drinking a berry smoothie – berry, fam! – everything about Zoocci Coke Dope is consistent with the image he’s been projecting to the general public since he first burst onto the mainstream scene around two years ago. The 23-year-old who was born Andile Sibabalwe is so serious about being a producer and vocalist who is a force to be reckoned with, that it borders on impatient.

“I feel like I spent a lot of time outside of where it’s really happening in the industry and, at this point, I feel like my peers are already way ahead of me,” Zoocci Coke Dope confesses between slurps of his smoothie. “So I feel like I have a lot of catching up to do.”

“The people I look up to started way young,” he continues. “But I spent about three years of my life working from eight in the morning to 4am the next day, every day. Just trying to get better and trying to do good work.”

In that time, he was the producer behind Blaklez’s radio-friendly, Freedom or Fame. Zoocci also went on to produce and feature on songs like DJ Speedsta’s I Don’t Know and Just To Flex, Flavours as well as Pablo, all by fellow Vth Season signee, Big Star.

Most recently, the Pretoria-raised artist has released his own EP, Morning Star. The title track presents a duality that Zoocci calls a split personality.

“With people I know, I’m very energetic and like ‘I want to take over the world,’ ” says Zoocci. “But I also have a side where I am a reserved introvert. With decision-making, there’s always been a conflict between those two personalities.”

That’s why the track is two of his own voices wrestling with words about how Zoocci should approach his career. The good guy raps: “Lately, I’ve been chasing things that don’t have a price tag.” But that track ends with four gunshots and the good guy is no more.

“When the gun shots go off, the ‘let’s go do everything now’ guy shoots the good, humble, graceful guy. That’s what the whole EP is about. When you care, you increase the chance of a whole lot of things going wrong and them affecting you, so I’ve learned to go for whatever I want and not let anyone stop me, as opposed to how I used to hold back a lot in the past.”

Another thing that doesn’t stop Zoocci from holding back is vitiligo. The different skin tones, for instance, around his mouth, make him instantly recognisable.

“It’s been on me way before I could remember and it’s in my baby pictures. People are weird,” he grins. “They’ll think about it and give me eyes the whole time and not say anything, but I don’t mind talking about it. If you see me doing my thing on TV and being on music videos, that should give you confidence to do your thing too if you have vitiligo. There’s no need to make it a campaign, like ‘Let’s stand together!’ That’s so corny,” he laughs.

On Morning Star, Zoocci tells several tales that give the listener a glimpse into his real life.

“The music is personal,” Zoocci says. “It’s very personal. I wouldn’t really like to involve my family or anything like that. On songs, I’ll speak about everything from my perspective, which means the story is about me.”

However, he lets us in on how he thinks his previously estranged dad must be proud of him from the coffin and how his mother is now famous in her office because her son is on the cusp of fame and fortune. On the EP, Zoocci mentions that his father died thinking Zoocci was upset with him, so I ask Zoocci if he is now able to reconcile his feelings about his relationship with his dad.

“I don’t think I could ever reconcile my feelings because it’s still something I think about,” he tells me. “Probably if I ever see him again – wherever we go after here – that would be the reconciliation.”

His nonchalance prompts me to ask if he really was upset with him.

“I was,” Zoocci admits. “But… I mean… I wouldn’t have expected him to leave at that time. It was just a thing of: I knew it was something we could sort out at any time.”

Now, Zoocci is using his time to push himself closer to his dreams. All Night Long, featuring A-Reece, is his latest single and the video sees goat imagery, A-Reece in a casket, Zoocci’s eyes turning black and more make people question what is happening with the kids.

“I’ve had good and bad feedback off that,” Zoocci shakes his head. “People will literally tweet me to say ‘I was rooting for you until I saw that video, devil worshipper. Some things are just art. Enjoy how it looks instead of judging it off things you don’t know for sure. My intention is to break barriers and show people not be scared.”

“Are we all going to shoot videos by a pool with girls in video in order for people to say: ‘Oh, you shot a nice video?’ I’m just trying to give you a different outlook and a different direction.”

That seems to be the Zoocci Coke Dope’s aim with all the moves he’s making and we’re definitely watching.