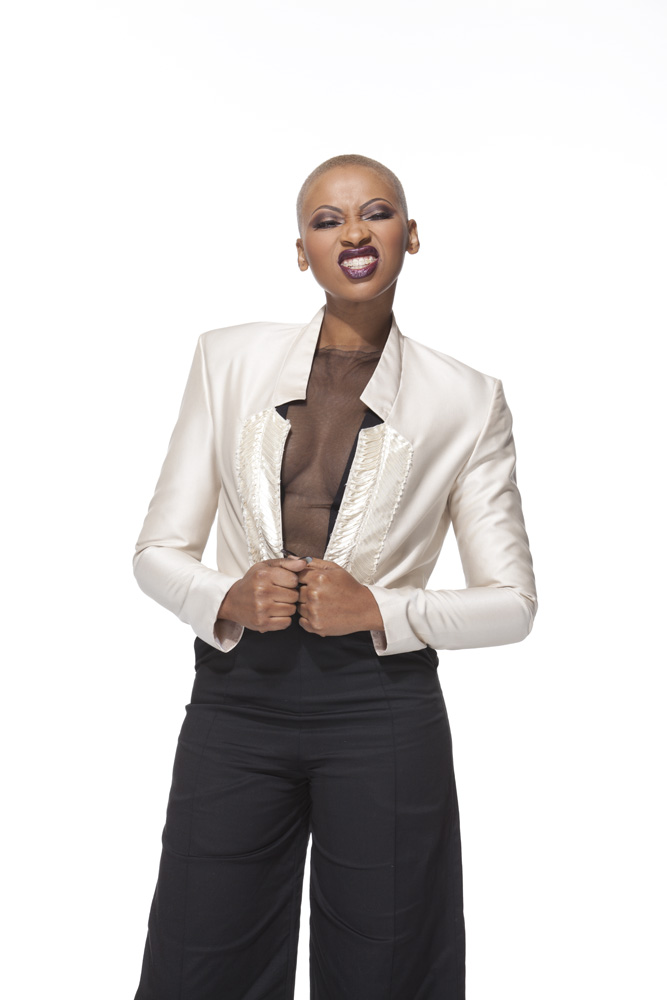 Writing, recording, producing – Zonke is a powerhouse. She made Helen Herimbi an exclusive audience to her new album.

She clutches her warm waterfall cardigan to keep it from cascading down as she bends to adjust the volume: “I want you to hear the actual music.”

I’m sitting across from Zonke Dikana, singer-songwriter, producer and all-around superstar at Sony Music in Johannesburg.

Sporting a cropped blonde do and enviable glowing skin, the artist who is popularly known just as Zonke is in a better place than she’s been in a while.

Her newest album, Work of Heart, is due for release on Friday and she’s amped to play it. The first song she decides to play is called Meet Me In My Dreams and is dedicated to her late older sister, the singer, Lulu Dikana, who died last December.

Hello again… she sings over pulsating guitar licks. The tambourines in the chorus add an air of triumph over what started out as a lump in her throat. With lines like “you said ‘baby don’t cry,’” this song is audio resilience. Zonke sits in her chair, listening intently. I wait for her to unpack her feelings.

“You know when you go out of your way to avoid something?” is the rhetorical question she asks. “On my first album, there was a song for my late mom. Then on my third album Ina Ethe, I had Viva the Legend for my late dad. And then I had to go and record this album. Oh my God, how do I not record a song about a fellow musician, let alone my own sister?”

So she chose to make the song an up-tempo one. Initially, Zonke says, she had been avoiding penning something for her sister – whose critically acclaimed music was a big part of South African soul music – and had gone into studio to record a song called Stay With Me. But then she was moved to record Meet Me In My Dreams.

“I was like: ‘I’m not going to be one of those people who always has a sad song,’” she shares, “I had something to say and because I couldn’t say it to her, I needed to put that song down. It was hard. I had a lump in my throat the whole time and didn’t want the engineer to feel like he came to work and now had to deal with this.

“When my first sister (Busisiwe Dikana) passed away in 2013, it was Lulu who told me that it’s just the body that’s gone, we can still feel her spirit,” she recalls.

“She was a born again Christian like me, so it was important for her to teach me how to mourn according to the Bible. That’s what has given me a sense of healing.”

Music seems to have played a major role in that healing process. “This is what I love,” she smiles broadly, “I know we all say that, but this is what I love and I finally picked myself up and went to the studio. That’s where I belong.” This is testament to why she decided to name her album Work of Heart.

“I never have themes for my albums,” she confesses, “they’re about me, how I feel, my thoughts – from the darkest to the beautiful. It’s spontaneous and honest. I love that! It’s just me, naked. You need to put your heart into everything you do. People can tell when your heart is no longer in it and I always put my heart into my art.”

Work of Heart is her fifth and with it, she ushers in a new phase of her craft. She’s actively pursuing the “world music” feel for everything she produces.

“World music, to me, means a universal sound where an album doesn’t have an identity of a specific country. Soulitary was universal in its sound, but when I came back to South Africa, every major record label said it sounded too international.”

Most people know her star rose when Zonke returned to the country, thanks in large part, to the vocal and writing work she did for Kalawa Jazmee artists. In addition to singing Thebe’s anthemic song, Groova’s Prayer, she’s written for Mafikizolo, Winnie Khumalo and even non-Kalawa artists like Black Coffee and Tshepo Tshola.

She has won multiple South African Music Awards, started her own label, Leely Music, which partners with Sony, and played a mentor role on SABC1’s X-Factor South Africa.

“Not to take away anything Kalawa did for me,” she says, “But people would say they can tell my voice is meant for other things as well. I know now what I can do and be me and people will get it… Had I been myself from the start, I would’ve been happy from the start.”