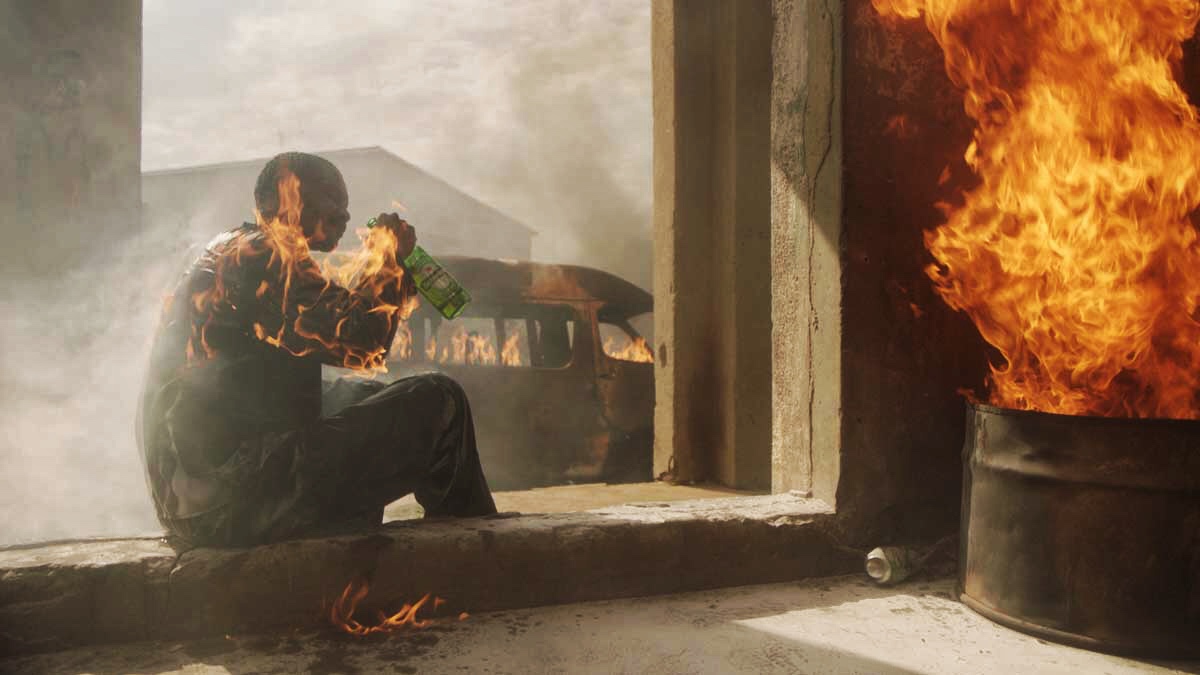 “I dubbed it Kasi Musings in Three-Part Harmony.” Multi-award-winning director, Tebogo “Tebza” Malope laughs after he tells me what he named the treatment he presented to Kwesta and his RapLyf team.

The result is a polarising, visually-engaging music video for the rapper’s platinum single, Spirit.

Shot over 23 hours and mostly in the K1 Gawd’s hood, Katlehong, Spirit is just over four minutes showing the upliftment of a people through images that are at once symbols of resonance and also aspiration. It opens with the words “Spirit. Kwesta ft Wale” stagnant over a familiar territory.

Rolling imagery of small houses built closely together, the omnipresent brown of a space that lacks grace and people going about their day, walking in opposite directions, set the scene.

Kwesta, sporting an Emmanuel Scara Ngobese tee, takes the viewer into the house and, with that, visuals of what made him into who he is take over. There is religion, tradition, a youthful carefree-ness and sports cars. The most striking thing about the video is how the montages are so closely linked that the ideas mirror each other even in movement.

Like how smoke as a theme appears from a dreadlocked guy sparking one, to a preacher’s swinging lantern, to a girl blowing out hookah smoke and a sangoma waving ishobe.

The beauty is in the subtlety. It’s poetic, like Tebza remarks in his treatment dubbing, but it’s also strikingly familiar.

“It was more like a meditation on what it’s like to grow up in the hood,” Tebza shares. “The first part of the harmony is about where we come from. The struggle, a bit of that previously-disadvantaged burden that we constantly carry with us.”

“The second part of the harmony is where we are now: somehow we find a way to keep the spirit up and try to make things happen. The third aspect of it is the aspirational aspect that shows that it’s inevitable for us as a people to make it.”

“The subtext of those three levels are like this,” Malope explains. “The first harmony about where we come from is represented by the spirit in a religious and cultural context. The second bit was the spirit of the hood hustle, in the sense that there’s a guy who rolls and spins his car to entertain people or the guy who washes the taxi on the side of the road for an extra buck.”

“The third one, which is the aspiration one, is primarily represented by the hip hop iconography: the super cars, the popping of champagne and making it rain with money, the girls, the fancy clothes at the club, the smoking of the hubbly. I wanted to use very typical hip hop ionography to represent that.”

“You take those three aspects and intertwine them and make it cut across and you’re essentially showing the spirit in all its facets. I think the idea was to package it in such a way that it feels like one thing even though there are a million things happening. What triggered that was: when I heard the song, I was like: ‘Holy Christ! Where does one go?’ It’s not a singular thought track.”

This shows in how active Kwesta was in the delivery of his message. “I asked Kwesta what the song means to him,” Tebza recalls. “He wrote me this paragraph with all these other vignettes.

“Like the guy who has just left prison and he goes to hang with the gogo doing the laundry – that was another aspect I didn’t think of. Everybody has a very different out-take from the song and everybody makes it their own.”

A scene that will surely be talked about once the video hits screens tomorrow is the burning of the apartheid flag. The montage begins with a young man with a tyre around his neck and the flag around his body in a burning bando.

The conjured image of necklacing in the apartheid era is chilling. In the next frame, the young man burns the flag.

“It’s a small moment, but it’s a big anchor of the video,” Tebza says. “We can’t talk about where we come from and the struggles we’ve seen as black people in this country without the context of what colonialism and apartheid have really done. I wanted to quickly burn the flag there to say: let’s try to keep our heads up, do what we can and try to move on.”

Spirit has some great lyrics and intelligent wordplay – the Gupta one comes to mind – but Kwesta and Tebza sought to convey a meaning beyond the head nodding. As evinced in DAKAR’s tweet on December 17: “You won’t read columns about how we took Black Consciousness to the top of the charts. It’s an anthemic dance song but the message addresses the state of a nation in distress From desperation to inspiration then aspiration, do you have the #Spirit?”