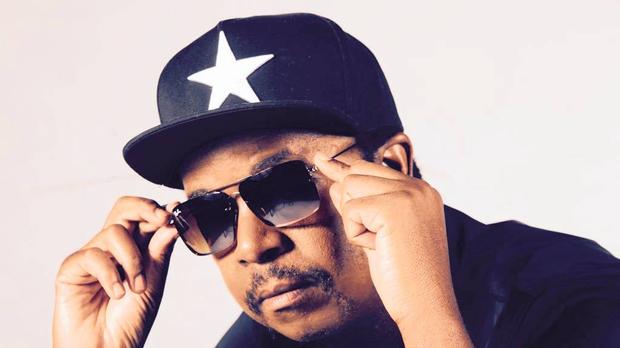 Ahead of appearing at the inaugural Red Bull Music Festival, Oskido talks to Helen Herimbi about kicking down closed doors

Oskido puts his hand up just as the waiter is about to turn around. “No,” the kwaito and house music pioneer says. “No bread.”

He’s just come from a general check-up at a medical centre in an affluent Jozi suburb, and he’s trying to follow his doctor’s orders. The fresh face underneath the red cap he’s sporting makes it clear that he’s been following his doctor’s orders for a while.

Perhaps it’s a combination of his youthful energy that allows him to keep up with the rappers on his radio show – as well as the slew of producers that want to run with the baton he’s passed on after taking South African house music to Miami and beyond. Or maybe it’s his zest for creating and mentoring even after co-founding the iconic label, Kalawa Jazmee.

Whatever it is, Oskido is the face of the new 50. It’s no wonder his new album is called 50 Degrees. On the album, Pepereza (featuring Dr Moruti and McKenzie) presents a bossa nova feel, while Ngci is given a soulful touch by M.Que’s sultry vocals and Ma Orange (featuring Candy, Nokwazi, Bhizer and Western Boyz) is undeniably gqom.

“For me, all of it was to say: ‘Let me check what’s happening in the music industry,’ ” Oskido tells me once our apple and ginger juices have been placed on the small table in front of us.”

“I just decided that, in terms of sound, all of these sounds mean something different to me. Especially the soulful stuff, I felt like there isn’t a lot of soul and people are forgetting about it, and that’s why I did a song like Ngci.”

“When you look at the gqom sound, that’s what’s happening right now. I just wanted to show people that I am still here, and I can do these things. Even the latino feel in Pepereza and the down tempo stuff – that’s big – and I grew up on down tempo stuff. So the album is about me and the stuff that I’ve played throughout the years.”

Oskido, whose real name is Oscar Mdlongwa, has released several albums as the Mixmasters and as a part of the duo, Brothers of Peace, with the severely underrated Bruce Dope Sebitlo. In the new millennium, he released an album a year for 10 years under the Church Grooves title.

Most recently, as a solo artist, he has produced and presented his signature vocals on albums that have become philosophies that he lives by.

I Believe is a perfect example. Whether he hashtags it or names shows and other things after it, belief in himself and a higher power is a big part of what’s kept Oskido’s name relevant.

On the title track of his latest album, Nokwazi sings a sentiment that rings true to Oskido: That all who have problems or need help come to him because he makes things happen. On the album opener, Amagrootman, Oskido is adamant that we have to listen to the kids, bro. But he also implores us to salute those who came before them.

Hater One Side (featuring Bucie) appears early on the album, as well as a slower version that closes the album and is titled I’m Blessed. In between Bucie’s sublime voice that is full of gratitude, Oskido repeats that the Lord has blessed him.

“Oh, that’s a hot track,” he exclaims after I mention Hater One Side. “I love that track! I wrote the song with Bucie and it was a very emotional time. She told me this story about how she gave birth to her first child and the child was premature. But we said: ‘the fact that the child is now healthy is good, you’re blessed.’”

Both of these songs are a message to the haters and a praise song to their maker.

“If you check, I always want to adapt to changes because if you stick to one thing, it becomes a problem,” says Oskido. “If you want to be successful, you have to have the ability to change. We did the up tempo song, but I felt the down tempo is back on air and people are feeling it now.”

Ngci (which is fast paced) and its downtempo reprise that appears towards the end of the album is a slow burn of a track that will become a scorcher soon. The message of the song is about knocking on doors that remain shut to you, but through perseverance, you finally win. I ask Oskido about some of the doors that have been closed in his face.

“What helped me get into the music industry was starting Kalawa,” he says while cutting his omelette. “We had recorded Boom Shaka and even BOP, and we had this demo, and we’d go to major record labels, and they would always say no to us.”

“That made us think and we started to press the cassettes ourselves and took to the streets to sell them and market ourselves. Me and Christos (Katsaitis, veteran DJ and label co-founder) were big in the DJ game and worked a lot with the tertiary institutions, and that’s where aboLebo would perform. People loved it! That’s how we kicked down those doors.”

Oskido will perform alongside 80 artists over six days, at the Red Bull Music Festival in Joburg in April. Here, he and the likes of DJ Tira are being honoured for the indelible mark they’ve made on music as pioneers. “That’s good,” Oskido says about the fest. “It’s good to be honoured. I also love that South African artists will be able to showcase their art, so the masses can see what they can offer.”

Tags: MusicOskido
Previous
On: Zoocci Coke Dope
Next
On: Doowap