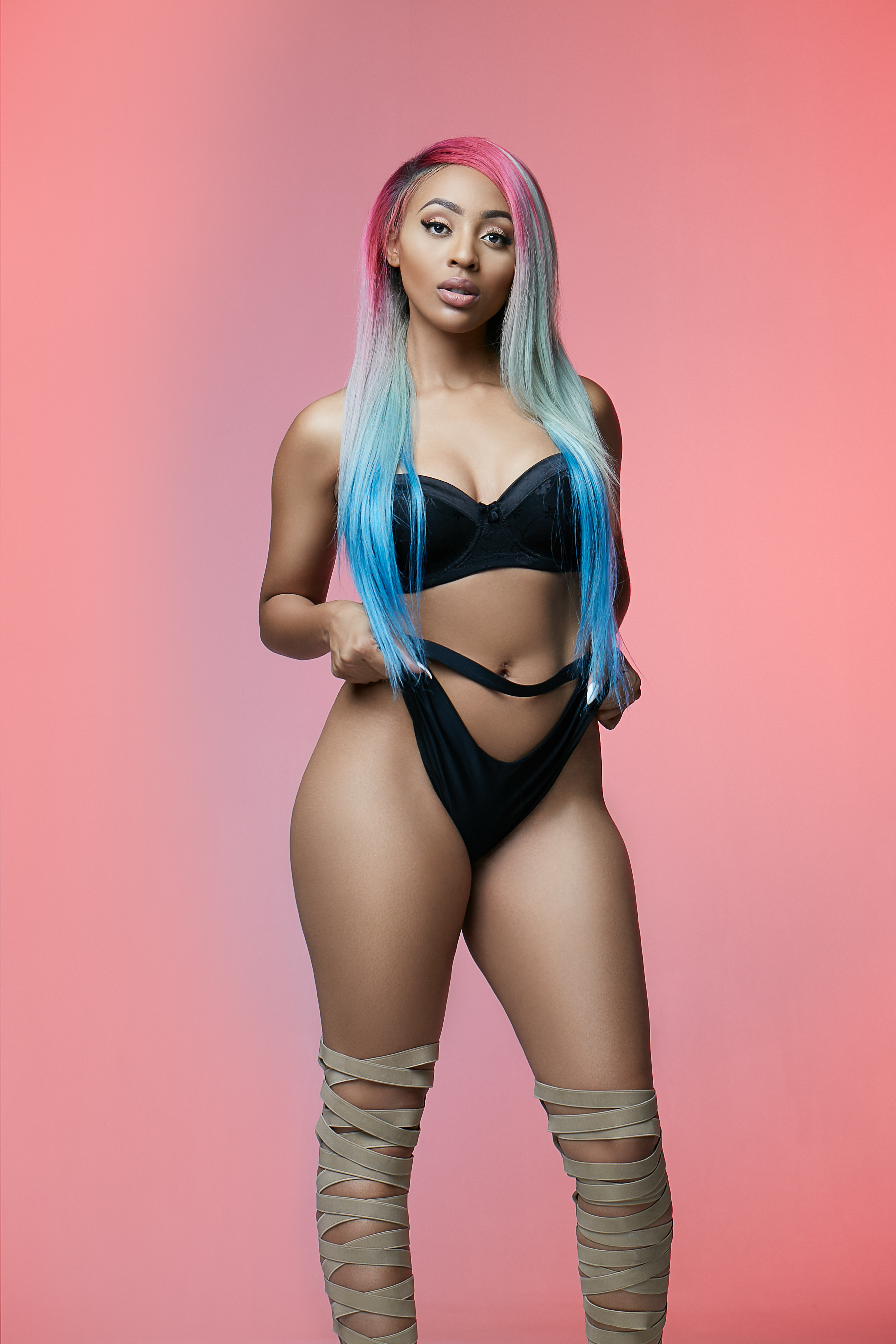 With the release of her new single, Nadia Nakai makes the transition from emcee to entrepreneur, writes Helen Herimbi

“I feel like I have chicken grease on my lips,” she says through a smile. Nadia Nakai has one arm around Kwesta and another holds up the peace sign. We’re on location at MTV Base’s Touch Base shoot, where a variety of artists are waiting to get in front of the camera, when Nakai takes the rare break to pose for a pic with Da King of African Rap.

The camera flashes a few times and she asks the photographer if she can see the pictures. “I look gorgeous,” she squeals before she makes her way back to the catering table for another chicken wing and to field requests to sit with interviewers from BET, Maftown Heights and MTV’s The People vs Patriarchy.

Even with a camera and a fancy phone zoomed in on her in a room where she’s surrounded by violins and cellos, Nakai brings a sass to the sophistication. And in all instances, she makes it a point to mention her new single, Naaa Meaan, featuring Cassper Nyovest, which is currently number 1 on YFM’s Top 40 chart.

Nakai delivers a catchy chorus for Naaa Meaan, where she not-so-subtly flexes about levelling up. Dropped a milli on my bus and my Audi, she raps. The flex signifies where Nakai is in the evolution of her career. We first caught a glimpse of this Nakai on Top Shayela, off Nyovest’s Thuto album, where she rapped: Just copped an Audi and I took it to the top/Aint never took a loan, I’m a boss.

We step outside the shoot and Nakai and I settle into the back of her latest vehicular purchase and, without getting too deep into her pockets, she puts her entrepreneur hat firmly on her tresses.

“I mainly wanted a bus because my team was expanding, one. And two, I wanted to sell merchandise out of the boot. Also when the album is out, I want to be able to promote the album with the actual artwork on the bus. I wanted a vehicle that worked for me.”

“When I first got (the bus), I drove it because I wanted to test drive it and all that stuff. I’m happy it’s an automatic because it’s pretty easy. I just haven’t really tried parking. The last time I tried to park it at my house, I asked the security to park it for me because I was too scared,” she laughs.

On her own Baddest Remix, where she drew a line in the sand after being excluded from AKA’s all-female remix, Nakai rapped about spending 10k on a weave and switching up the colours for each day of the week.

On Miss Pru’s Isaga Lam single, where Nakai is featured, she namedrops bloody shoes, duffle bags and ranches. So how did we go from gender-specific braggadocio to all-encompassing capitalism?

“I feel like I’m growing my brand and when you grow, a lot of people get involved in what you do and you have more people you have to cater for,” she shares.

“I am starting to pay salaries, like Cassper always raps about. I am able to have people who work for me – not the record company but Bragga Holdings, which is my company – which is exciting for me. It’s a big responsibilty but it’s just growth.”

She also tells me: “I feel like I was in a different place. As you grow as an individual, the things you care about change. Before, when I used to floss about my hair and how much it costs and whatever, that was something that was luxurious to me then. That’s no longer something luxurious to me because I buy hair all the time. I’ve upgraded to cars and jewellery and houses and that’s something that is luxurious to me. When I have multiple houses I’ll start to think about jumbo jets.”

I ask her what the catalyst behind this growth spurt was and Nakai says: “It was definitely this year. I just saw that I was doing a lot of gigs and wanted to use my money for the right things and invest in myself again.”

“I had a lot of time to think about things outside of music because I didn’t drop the whole year. I was focusing on other revenue streams that I could create for myself.” But for now, she’s back to the music.

Thinking of a master plan

The last time I sat down with Nakai, her seminal EP, Bragga (which has since become the name her legion of fans, the Bragga Bad Bads, call her) had just dropped.

She was working non-stop, barely finding moments to eat and promoting her first offering since she signed to Nyovest’s independent imprint, Family Tree. In addition to the fact that she’s now made the time to dig into some spicy wangs, a lot has changed.

On Naaa Meaan, Nakai presents puns about bachelors and levelling up to masters. The rhyme scheme includes running like Caster (Semenya) to catch up with Cassper. “I’m going to be doing the same kind of shit he did and maybe even surpass him,” Nakai explains.

“I’m not saying I’m a master of my craft but I’ve gotten to a point of realisation and revelation of who I am as a musician and that is equivalent to the feeling you get when you get your masters.” She bangs her fist on the seat as she says this.

There is, however, the problematic line where she spits: I signed to Cassper/He’s the master. I ask her if she was concerned that the image would conjur up the idea of slavery.

She confesses: “I didn’t get the image of slavery until you just said that. No, it wasn’t like that. He is my boss at the end of the day and his position is the head of the record company.”

As such, Nyovest advises her on her debut album that was meant to be released this year and has since been pushed back.

“I started recording my album,” Nakai pauses for a moment. Then she continues: “I thought I knew how to make an album and I actually didn’t. I was just doing songs that I enjoyed. A lot of trap songs, a lot of wavey music. Songs that weren’t necessarily good for an album. I wasn’t really storytelling. I was doing things that I was comfortable with. But (Nyovest) showed me how to use real instruments – because I’m used to the types of beats that hip hop heads use.”

“I wasn’t thinking about getting a pianist or guitarist or percussion – the stuff that you use to make music. So when I went to him with the songs, he said they were good for a mixtape but your album needs to be a little more…”

A mischievous grin crosses her face and then Nakai says: “I don’t want to say too much because that’s when people steal your sh*t and then end up doing it before you have a chance to do it.”

Nakai’s story is still being written and while she holds the pen, she passes a page to younger people who are entering the industry.

Back at the shoot, when it’s Nakai’s turn to be interviewed on camera, recent MTV Base VJ search winner, Tshego Masupye, does multiple takes over simple questions. He asks her about being a woman in hip hop and she tells him: “You need to trust your journey.”

Then she unpacks hers from the days she was signed to Psyfo’s Sid Records. Masupye gets feedback from his directors and has to ask the question again while practising the notes he was given. He seems disappointed that he didn’t get it right the first time around.