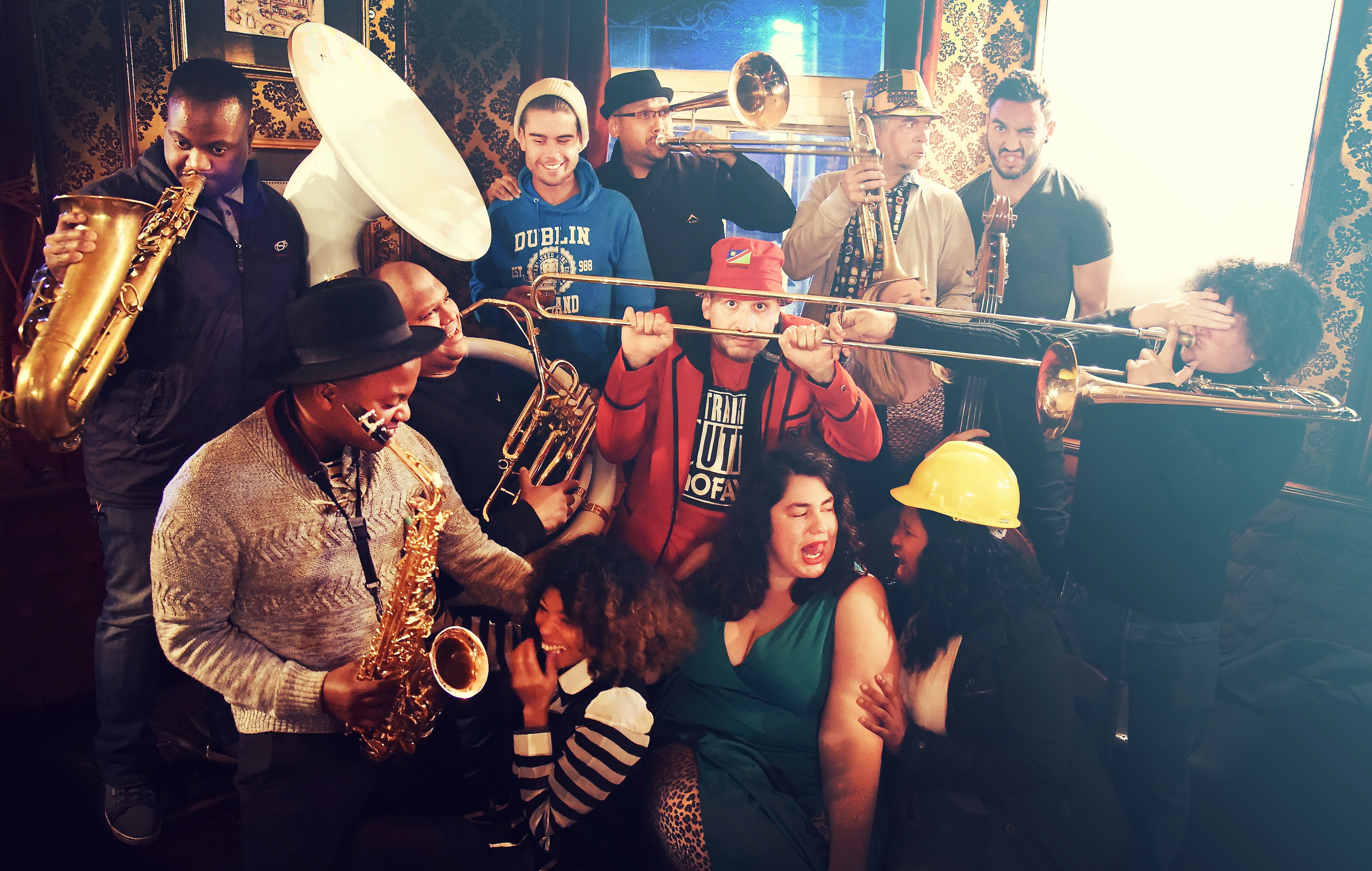 You know the saying: You can chew gum and cross the street at the same time. I’m not sure how easy it is to play the trumpet with gum in your mouth, but armed with his horn, Marcus Wyatt can make magic and cross the street simultaneously. And he often crosses into bands – some of which call him leader – that challenge the confines of genres.

One such example is his newest band, Bombshelter Beast. Made up of a motley crew of artists – and described as “afrobalkan skadubhall” – this band is putting on a special show at Rumours Rock City in Randburg on Friday.

But when I meet up with the Language 12 maestro a few weeks before, he’s preparing to travel to Europe. It’s also a few weeks after he reunited with his first professional band.

Over a decade after they last played together, a well-loved quintent called Voice got back together for The Orbit’s birthday festival. Made up of Wyatt, Andile Yenana (piano), Herbie Tsoaeli (bass), Sydney Mnisi (tenor saxophone) and Morabo Morojele (drums), Voice was an institution in the early naughties.

They were what jazz journalist Gwen Ansell called “the best outfit in Joburg”. I ask Wyatt how it felt to be back together, even for one night. “The reunion was cool,” he says as he looks beyond the lenses of his orange glasses and way past me.

“I love all of those guys. That band meant a huge amount to me. When I got to Joburg that’s the band we started and it was the first project that I really felt helped me to grow. Sydney Mnisi, the tenor player, has always been an inspiration to me – the way he plays.”

“I think we realised, through the process of doing this, that the band was kind of important in the lineage of South African jazz. A lot of younger musicians were excited and told us how they’d listened to the band. In that sense, it’s great because you always want to know that what you’re doing has some kind of value, but everyone moves in their own trajectory.”

The Bassline, which was originally in Melville before it moved to Newtown, was home to a lot of jazz, poetry and other creative arts. Voice played there a lot, but before I knew of Voice, I knew of the name Marcus Wyatt, through Tumi and the Volume. For the latter’s classic debut album, Live at the Bassline, Wyatt was one of the standout musos who contributed to a stellar body of work.

“I was playing a lot with a couple of other bands at that time. I wonder if Carlo’s (Mombelli) Prisoners of Strange had already started at that time,” Wyatt says, then strokes his short salt-and-pepper beard. “I don’t know. But Bassline used to be like a second home and I used to live down the road. I don’t know if that’s where I met Tumi and Paulo and the guys, but the one thing I enjoy about being a musician is playing with other musicians. I couldn’t just be one thing.”

This was probably instilled in him by his musician father. Wyatt shares: “I guess, on the one hand, it’s the way I grew up. My dad is a musician in the blues folk club scene and my mom was in the theatre, and my sisters were dancers. I grew up in big brass bands and orchestras. Then I grew up into the jazz. I guess I’m interested in so many different sounds and I feel I am maybe a bit of an explorer, sonically.”

Following his solo debut, Gathering (2000) and its follow-up, Africans In Space (2002), Wyatt released Language 12 in 2006. It became a seminal work– so much so that he started a band called Marcus Wyatt & Language 12, and put out two more albums with them. While it’s true that Wyatt enjoys collaborating, it’s also true that he holds onto the collaborators he has the most chemistry with.

One such person is trombonist, songwriter and singer Siya Makuzeni. They have worked together on each other’s projects as well as others.

“I think, musically, we are kindred spirits. We don’t work together much at the moment, but we started playing together in Prisoners of Strange. We grew together a lot musically and she always inspired me.”

In the beginning, there were many bands. One of them was Wyatt’s ZAR, which included Janus van der Merwe, Romy Brauteseth, Sisonke Xonti, Alex Hitzeroth, Aldirt Du Toit and Bez Roberts. They then became the foundation for a new creation: Bombshelter Beast. Following Van der Merwe’s big band first Tuesdays at The Orbit, Wyatt was approached to start a residency at the club.

“Running a band of more than six people is super tedious in all respects,” he smiles. “It’s an admin nightmare. This idea was in my head for a long time.”

First, Kagiso Lediga and Trevor Noah asked Wyatt to “come up with a soundtrack for a (soccer) movie called Taka Takata. I think it’s still coming out. It was filmed in 2009 and it’s about a really bad soccer team. They tried to align it with 2010 and the parallels were obvious.”

“There was an Eastern European element in the film, because the coach was a Serbian guy who had strange methods. The brief for the music was there was a Balkan influence, but it was a Jozi story. I don’t know how we ended up booking Pitch Black Afro and Mapaputsi for the soundtrack but they came in and it was a mix of styles.”

While waiting for the film to come out, Bombshelter Beast started performing the songs from the soundtrack and have since released an album, The Dance of the Chicken. Also on the album is a remake of Wyatt and Makuzeni’s Madam Bliss, from Language 12. This time, Pitch Black Afro and Zolani Mahola take on the song.

“Madam Bliss is just about how we all struggle with some things – whether it’s a person or a substance – that we know isn’t good for you,” he explained. “There’s an irony in the name and with the Bombshelter version, we wanted to up it a few gears with all the horns and Pitch’s rap and Zolani’s voice.”