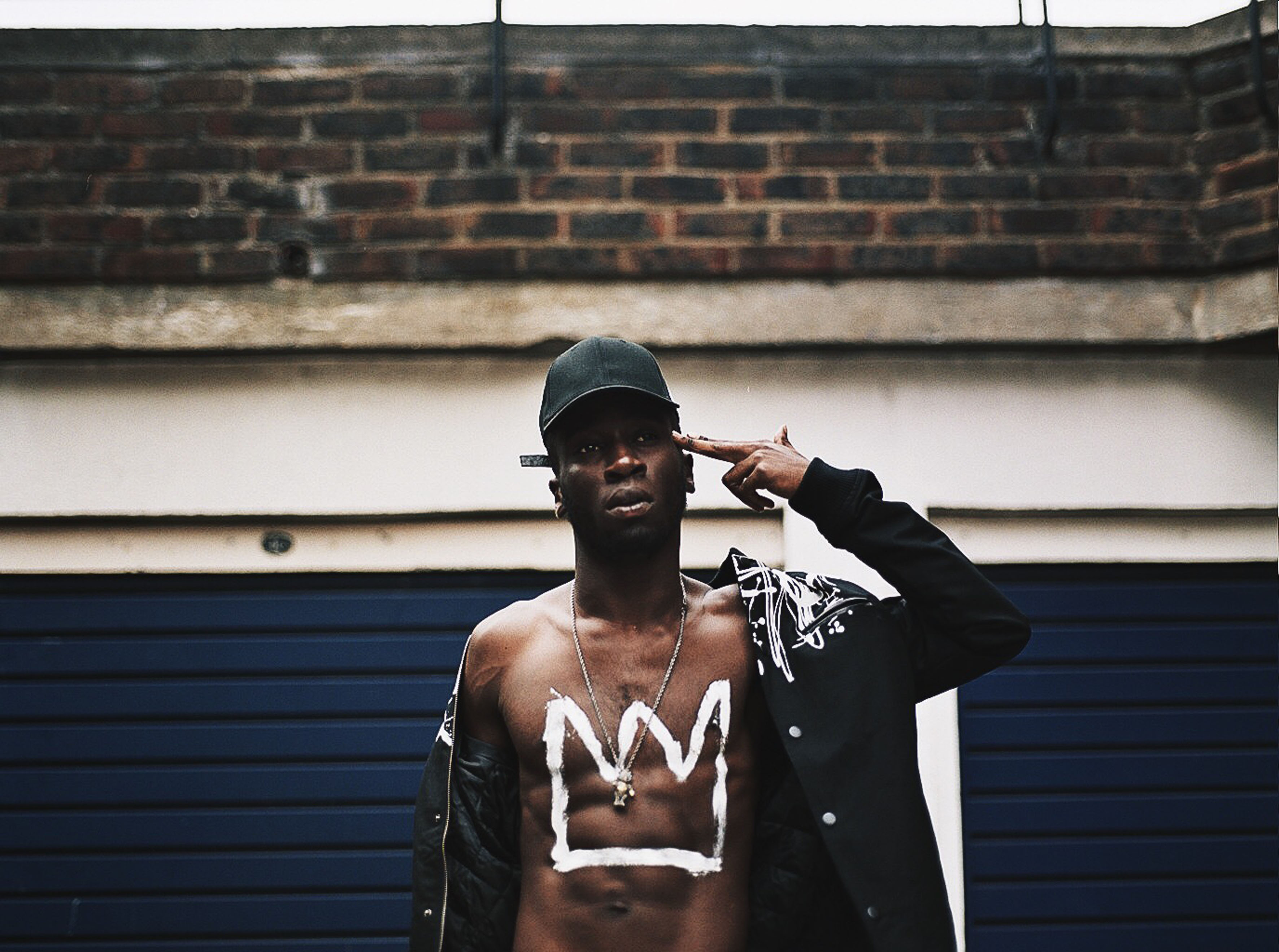 Kojey Radical is in bed. In his defence, 10am UK time and 10am Mzansi time are not the same, so he thought we’d be catching up later. Even under his duvet, the British poet-MC and visual artist is in high spirits.

Above him is what initially looks like a clock, but it’s actually a painting of a character in blackface, with a Basquiat-esque crown floating above it and the word CHANGE painted in red.

“Yeah, it was based on Irony of a Negro Policeman,” Kojey Radical says in a groggy voice deeper than what is already his signature on songs. “But then I flipped it to, like, some Obama.”

On Friday, he’s headlining an event in Joburg presented by We Heart Beat in collaboration with Feel Good Series. The event will feature DJs as well as an exclusive screening of his short film, New Generation, which is hosted by Creative Nestlings in partnership with the British Council’s Connect ZA.

The film, which is directed by a collective called The Rest, as well as Kojey Radical, brings to life the songs that formed a compilation called New Gen which has a tracklist that includes the likes of Ray BLK, Jevon, WSTRN and others in burgeoning black British music.

Which is why I find it curious that there is a scene where a R50 note with Dibs’ smiling face on it is placed near pounds. “My ties to South Africa kind of snuck up on me,” he tells me. “I didn’t know I had ties ‘til I started to develop the music. Two of the people in my team are South African. I think the decision to include the rand came from them.”

“But we always try to call back to Africa in some of our work. For us, details like that are for the watchers. I’ve always wanted to create around the influence I’d take from South Africa, but I always felt like it was difficult to do that without being in South Africa. I felt I needed to understand it more fully. Otherwise. it feels quite distant from the land. But details like that are just to show people that we care and we’re coming!”

During our interview, we touch on his stellar EP, 23 Winters, which sees his dad (who along with his mother is originally from Ghana) narrate the offering. “The reason why I made the project in the first place was this: I had a whole other project at that time and it just didn’t feel right. I didn’t feel confident that it really said something.”

“I would speak to my dad a lot at that time and he always had these real gems. I thought to myself: ‘there’s no point of me going away and retelling what he told me. I might as well just let him tell it. By letting him tell it, it juxtaposes our experiences which are actually very similar and it allows people to look at those experiences in a way that puts a bridge between two generations.”

Kojey Radical continues: “Especially for African culture since some of the ways our younger generation is raised with are somewhat contradictory to the old African ones. I think just hearing his voice felt familiar for a lot of people. A lot of people just don’t talk to their dads.”

While in South Africa – where he’ll also celebrate his birthday in January – Kojey plans to take in the whole country and smoke a lot. As we’re speaking, he rolls one and tells me about his newest album, In Gods Body. The album has a certain effervesence to what is still dark introspection.

There’s After Winter which sees Kojey Radical rap: I saw Roots way before they saw Toy Story. He also says: All I want is 40 acres, a mule and my respect.

Kojey Radical is convinced he is destined for greater. After Winter evokes a sense of knowing that he wants to be a better man but he’s just not there yet. That is also echoed in his his obsession with flight.

An example is the sublime Icarus, which features Shola Ama. Icarus is a reflective ditty that carries the line: I hope you don’t see the day they clip my wings. So I ask him why the imagery of clipped wings – which also shows up in the film – resonates with him so much.

“A big part of why we use the sentiment is that we all understand the potential we possess, the heights we can reach and the moves we can make to affect future generations in very positive ways,” he shares. “But there are a lot of obstacles that try to make sure we never take flight. The purpose is to say: ‘I’m down but I’m not done.’ And that’s the most important thing.”

Tags: Kojey RadicalMusic
Previous
On: Blitz The Ambassador
Next
On: Tebza Malope