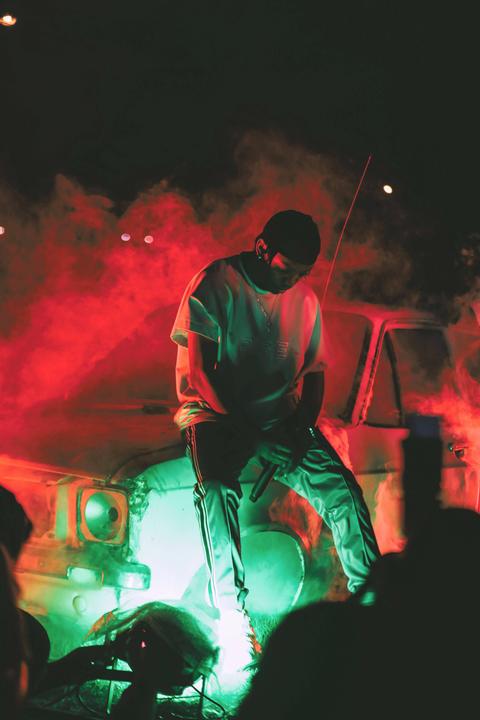 With a film about his journey under his belt, Frank Casino tells Helen Herimbi about the ride

We waited, hey. It was like watching icebergs melt. Or waiting for Joe Budden to say something nice about a rapper born in the ‘90s. We waited a long time to see From Frank: A Story By Kulture. But what’s a few hours to a kid who has been waiting his whole life to get his moment in the sun?

To his credit, the rapper was actually at Agog Gallery an hour or two before the actual screening. So he was also waiting, just like us. Except maybe some of the influencers who were invited to be the first in the world to see the short film that is directed by trailblazer, Zandile Tisani, didn’t actually know he was there.

Cut to a dark room. The screening is about to begin. Jay Kayembe, from Kulture, is explaining how Frank Casino is the first South African rapper to be given this much creative control by Castle Lite since Kanye West was here.

Remember that cube AKA came out on when he opened for Ye? The word is that was actually meant for Kanye, but he didn’t end up using it. Cubes seem to be a thing for the adult beverage brand because, for his concert, Casino had quite a few that elevated him and his rap friends as they performed. Some of this is captured in the film.

But back to that dark room. Kayembe is talking. Two girls are in front of me. One has a long weave cascading down her shoulders and a pink drink in a wine glass. The other also has a pink drink, but wears some zigzaggy skirt – you know, the stuff that’s made for the ‘gram.

They are yapping on about something that isn’t what we’re here to do and are abruptly returned to our world when the film starts. Casino is in the centre of the screen. He is pensive, waiting to be told when the cameras are rolling.

“Is that him?” Weave Girl asks. Zigzag shrugs her shoulders. On the screen, a voice from a person unseen asks Casino how he came up with his stage name, Frank Casino. The two girls in front of me shriek to each other and Weave Girl says, not-so-softly: “That’s Frank Casino.”

When I sit with Casino in the wine tasting room of the gallery space, he expands on his name. How the idea of Frank conjures up a directness, a sincerity, an honesty that even those who don’t know what he looks like will soon become familiar with.

“As a musician, it’s my priority to share everything I’d like to share through the music,” he tells me. “And as a person, that’s when you’ll know more than you should know. That’s when we should have no boundaries. It’s almost a contradiction because music being therapy to me, it’s like I’m speaking to myself.”

“I like to record a song, and however long it has been after, I like to know what state of mind I was in – three years ago, two months ago. As human beings, we have different phases and I want to know how I handled whatever was thrown at me at the time.”

Casino has long been surrounded by the likes of Priddy Ugly, who also appears in the film. But what’s striking is how his producer and manager are his childhood friends, friends who refer to him as an introvert.

When Casino released Just Before The Riches in 2015, he was a kid with some promise. Then last year, he put out the ultra catchy The Whole Thing. So catchy in fact that Riky Rick jumped on to it for a remix. Last week, that remix scooped a South African Hip Hop Award.

“I’m happy with us winning awards,” Casino smiles, “and I’m looking forward to us doing more than just winning awards.” The bromance between Casino and Riky Rick is familial. Boss Zonke refers to Casino as his first born son and rappers like Nadia Nakai call Casino nephew. I ask Casino if he feels like he’s found his own rap familia.

“These are special people to me,” he grins. “People who are also pushing their dreams. People who inspire me and who I learn from. Whether it’s them telling me something or me just watching, I’m observant and respect them. There’s perception and there’s what you know and I like them for what I know.”

The difference between young Frank that we see in the film and the Frank that collaborated with A$AP Ferg on Low and has just put out New Coupe is striking. For one, his voice has become this deep drawl and he is adept at using lackadaisical delivery as a trojan horse for his storytelling.

Like how, on Mayo, he raps: I want yours and I want mine/ Play your cards, they may decline.

Casino’s been sweating since the film finished playing. It was funny to see him check his designer shirt for sweat marks because it’s nice to see a kid reacting normally to the spotlight. He wipes his brow several times during our interview. Before I let him go, I ask him what phase he’s in now.

“This is just before everything,” he says. “Everything meaningful in the sense of joy. For me, this is only the beginning. This is the bit in a biopic that they show. You know, the part before things really happen. I think this is it. So people should look forward to getting more music from me.”

Tags: Frank CasinoMusic
Previous
On: DJ Bionic
Next
On: Solo & The BETR Gang