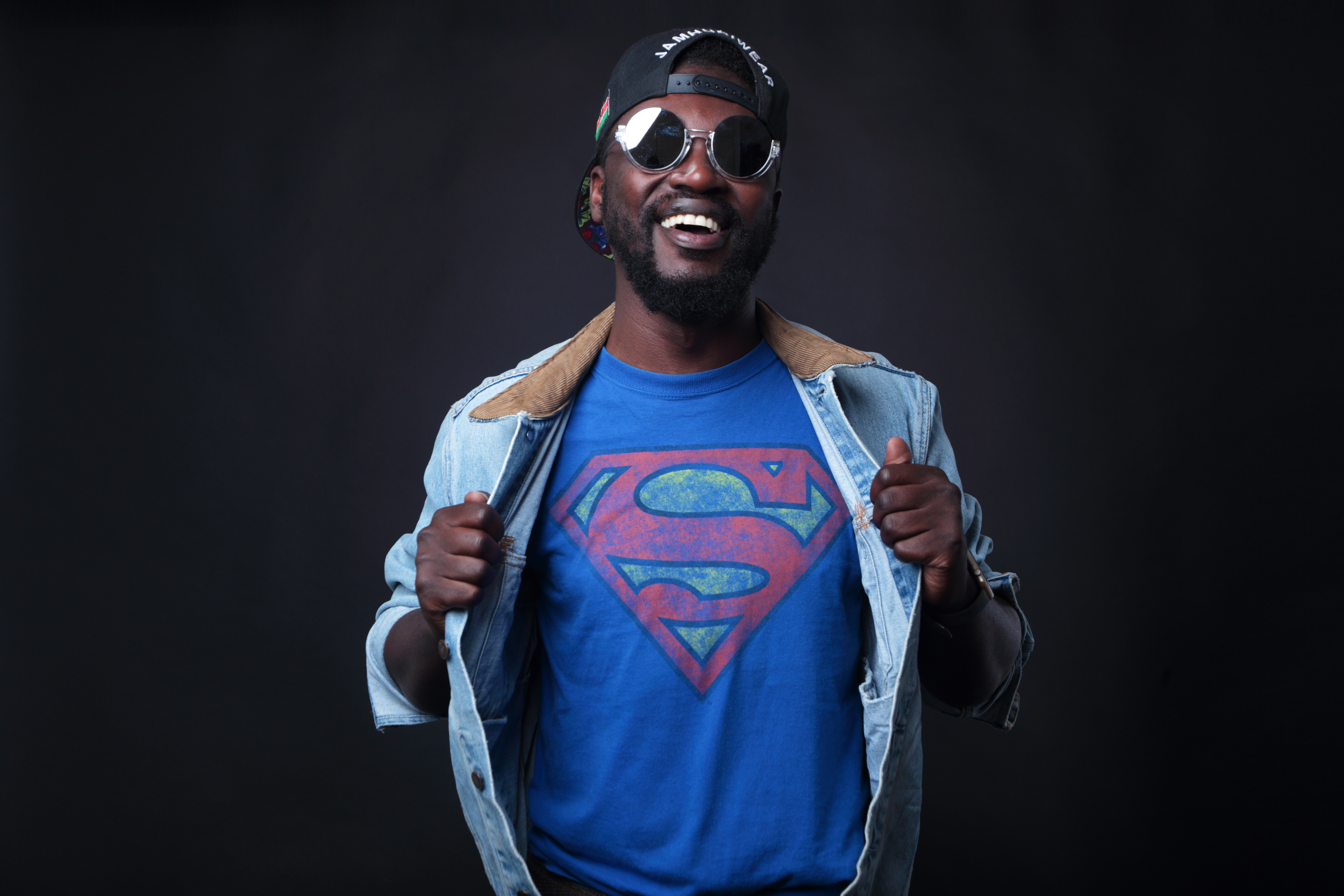 It’s a hot Jozi day and the rescheduled date for my Skype conversation with Blinky Bill. The reason I was unable to chat with him days before was because my neighbourhood had experienced power cuts.

When I finally see his face on my screen – his hair has become these long dreads since I last saw him in person – the musician tells me he also didn’t have electricity that week. But even so, we find a way to connect Johannesburg and Nairobi.

As the most popular face of Kenya’s alternative group, Just A Band, the man who was born Bill Sellanga has continued to push the envelope. The producer, vocalist and DJ went solo and put out his 2016 EP, We Cut Keys While You Wait, which was accompanied by afrofuturistic visuals. But, it’s his upcoming pun-laden debut album, Everyone’s Just Winging It and Other Fly Tales, that’s got most people excited.

“I’m working on my new album, so it’s only fair that I do a couple of new songs off it at Little Gig,” he tells me about performing at the 24-hour festival that takes place in Cape Town next weekend.

He’ll also be in the Mother City for a few shows, and I ask him if he’s worried about the road to Day Zero.

“I’ve seen that it’s a bit of a disaster,” Blinky Bill chuckles. “How did it get to that situation? This is like an episode of Black Mirror! Now, I have to carry wet wipes. I’m sure we’ll figure it out. I’ve survived harsh environments before, so this water situation is not something that gives me sleepless nights.”

With their debut album Scratch To Reveal, Just A Band became the poster child of black, alternative East African music. The trio put out their second album, 82, which spawned the viral video for Ha-He and allowed Kenyan popular culture to flourish with the return, through their music, of a character called Makmende. One would argue that Blinky Bill and his friends still have more success in them.

But he tells me: “I feel like it’s always daunting and it’s one of those instances where I was like: ‘Just A Band is a formula that’s working so why put this EP out now?’ But on the flip side, I didn’t want to be that guy who is just from Just A Band. Look at someone like Steve Jobs who went and started Apple and then went and started Pixar and was successful. It’s always good for an artist to challenge themselves in that way. When we started Just A Band, no one knew about that format, so we had to grow an audience. I love working with successful things, but it’s also nice to start again from scratch. It’s a really dope experience.”

His six-track EP featured the likes of SA’s own, Aero Manyelo and Blinky Bill says: “The EP was mostly me as a producer and providing a bed for other vocalists to come in and express themselves. With this new album, it’s full-on me and a bunch of really good friends on it. I’m really optimistic about this new project, and I don’t think I have been this way since the second Just A Band album.”

The project he talks about is his debut album, Everyone’s Just Winging It and Other Fly Tales. He looks genuinely excited to tell me about it and pushes his signature thick-framed glasses up the bridge of his nose as he gets ready to tell me more.

“I’ve spent a lot of time just observing people – and myself as well,” he starts. “I think sometimes I can have good intentions and sometimes those intentions don’t match up with what I do.”

“My mom is super Christian, so growing up I always felt like she prays all the time so everything is supposed to work out perfectly, but life just happens to her as well. It’s not just about failing. Even when you succeed, you don’t know how you did it. So I thought, ‘man, this would be a good title for a book… or an album’. And then it stuck.”

The lead single from the album is CC God, and the single artwork is of his grandmother. His videos have also featured stylishly dressed octogenarians and sci-fi elders (on No Touch Am featuring Nneka), and Blinky Bill tells me he’s fascinated by old people in general.

“Maybe because they have so many stories to tell and sometimes we don’t get to tap into them because we’re caught up in our own lives,” he says. Another song that will make it to this debut album is an as-yet-untitled song which features Nneka and our own Petite Noir.

Blinky Bill attempts to explain how the track came about and eventually he gives up and says: “Let me try and play it for you!”

It’s a lush ditty that starts with jubilant keys and sees Blinky Bill sample and chop up traditional Kenyan chants to support the “All for One” refrain. As the song plays, I watch Blinky Bill listen intently and wonder if he’s picking out flaws before he puts the song out.

“The frequencies might be a bit muddy but you get the idea,” he bashfully says once the song has ended. Although his band had meant to take a two year hiatus since 2015, it seems Blinky Bill is still merrily finding his sound. “There’s a lot of Just A Band content, now I just want to tell my story,” he says.