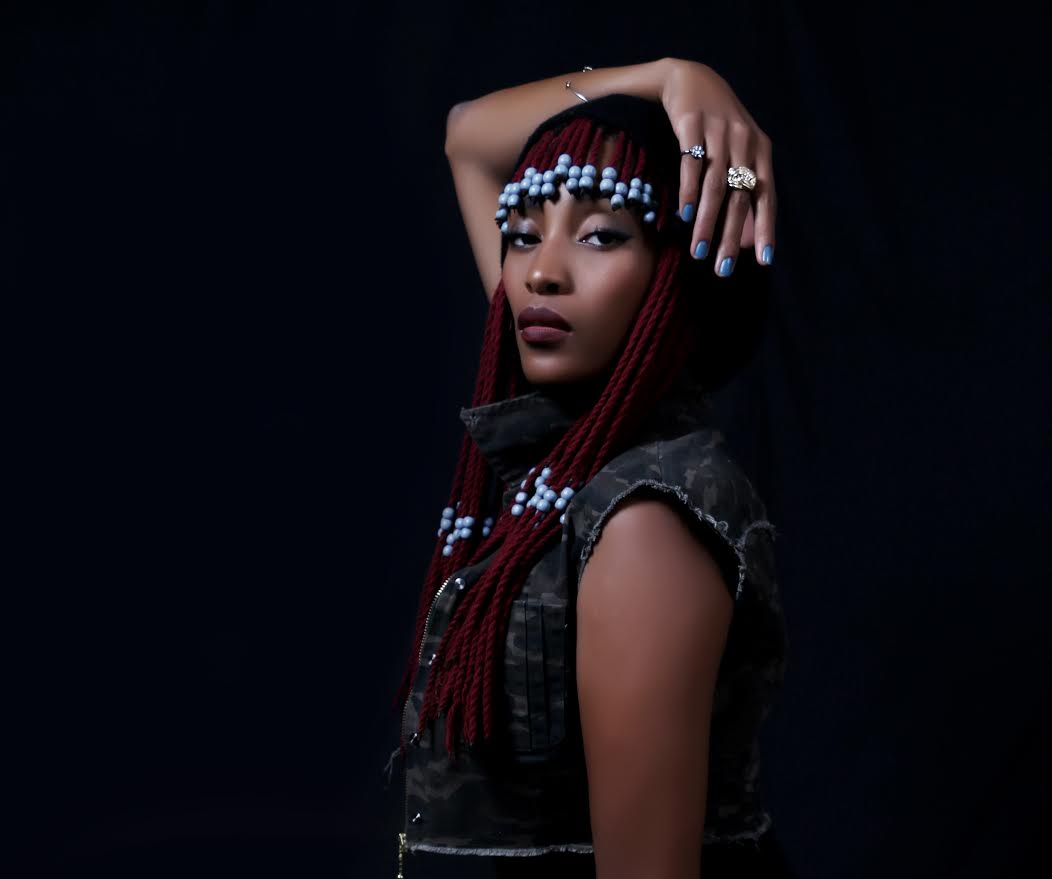 I’m running – okay, maybe it was a light skip – down a Sony Music corridor so that I don’t miss the performance when I hear someone call my name. I turn around and it’s the MC-singer-producer of the hour, BK.

The artist, real name Bokamoso Gumbi, looks so different to the last time I sat down with her to talk about her EP, Ta Fego. She has been sitting in a small boardroom, getting ready to be a pint-sized dynamite on the stage. The show we’ve come to see is, after all, called About To Blow, which is brought to Sony HQ by the good folks at the Trace music channel.

As we’re chatting, a music video by a popular SA woman who raps, comes onto Trace on a TV in the boardroom and I tease her about whether she’s taking notes.

“I love (name redacted for you nosey pot stirrers),” BK exclaims. Then she tells me it won’t matter if she says that because people want to believe women don’t get along anyway.

This moment, though, is about one woman only: BK.

The makeshift stage is on the record company’s rooftop, and there’s a slight breeze in the air. She steps up, wearing a Puma jumpsuit, and the flyest jacket that she later has to look for after taking it off during a fire performance.

She’s come a long way from red braids with beads and a more military look.

“I wouldn’t say this is a new BK per se,” she tells me once we’ve sat down.

“Ta Fego was heavy,” BK continues. “It had slow, dark trap. At the time, I was listening to a lot of Bryson Tiller and those guys who had that influence. Now, I’m listening to a whole lot of other stuff, so my head space when making music is completely different.”

This BK is fit for her new sound. Her latest single Never Been My Type has a pop-tinged Caribbean feel reminiscent of Torey Lanez’s breakout hit LUV.

This time, she’s leaning towards trap and Boom, an up-tempo song she performs with Reason, puts girls with big booties on a pedestal. There’s a snippet of a song featuring KO that she performs that really allows BK to flex her rapping muscles. Her flow is different on each ditty.

The song featuring Mr Cashtime is called Follow and is her next single. BK says: “That’s supposed to be the next single, according to the chats we’ve been having with the label. It’s straight bars and just raps,” she grins.

“We’re not taking shots at anybody, but we’re definitely rapping. Boom is not actually a single, but it’s a song I really, really like to perform because it’s so much fun,” she continues.

“Even when we were making Boom in studio, it was so much fun. So it’s like my mood upper in my set. Well have to see if it’s a street drop, or a single.”

BK’s 2016 EP, Ta Fego, is one of the most slept-on bodies of work. It was named after her father, who was also a musician. On it, BK raps and sings about toxic relationships, sexual liberation for women, and more. Oh, and never, ever think she’s a red velvet cake type of girl.

If these new songs she performed are anything to go by, BK is upping the ante with her upcoming debut album. The Never Been My Type remix, featuring Tshego, already has a video and she is working on her album.

“My album is coming,” she makes a bubble sound with her lips. “It’s coming soon. I was supposed to wrap up the album last weekend, and that was moved. I just feel that I first need to build a bigger fan base because if I drop the album now, then who is going to buy it? I feel like more people need to know who I am, and what I do.”

Seeing that she just showcased her work at an event called About to Blow, I ask BK what has to happen for her to know she has blown up.

“My definition of blowing up is me having a bigger fan base,” she smiles.

“My music playing on all sorts of different radio stations and not having difficulties with that kind of stuff. The bookings and journalists coming… all of that!”