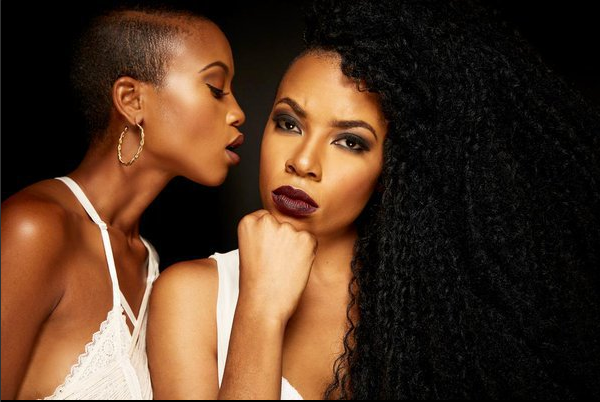 Rouge uses the apple-green lollipop in her head to emphasise her exclamation.

“The one I am going to kill you with is the one you are featured on so now it’s awkward.”

The one refers to Mbongo-Zaka, a song by Rouge featuring Moozlie, and this is the beginning of the first catalogue battle between South African women who rap. It follows in the tradition established by Swizz Beats and Timbaland’s Verzuz series where peers hop onto Instagram Live for a duel of the beats or bars. We have coronavirus to thank for that.

IGers have seen battles between the likes of DJ Premiere Verzuz RZA, The-Dream Verzuz Sean Garrett and, basically, a bunch of men competing against each other.  In South Africa Tweezy versus Gemini Major drew thousands of viewers to what was a reminder, IMO, that Tweezy has been a chief architect of modern South African rap for many years.

So, fast-forward to Monday 13 April 2020 and the sistas, to take a page out of the Eurythmics’ songwriting book, were doing it for themselves. It was Moozlie versus Rouge in 10 rounds of songs from their catalogues and one bonus round that tasked the two with playing us some unreleased songs.

Look, it was no Scrambles 4 Money but it was interesting.

It was dope to hear where each rapper started and it was even better to see how far they’ve come. Mbongo-Zaka blared through the speakers that many people complained to Rouge about much later in the battle. That was followed by the category: Slept On Track. Moozlie kicked off that round with Vatel featuring Kid X.

“Whatever category this is, Moozlie takes it,” commented Bash.

And there’s some truth to that. That song is evergreen. But is it really slept on? Moozlie said she chose it for that category because “it wasn’t number one on the RAMs (Radio Audience Measurements)”.

Rouge’s pick for that category was Sheba Ngwan’ O. And while that song is nationally known, it could’ve been an anthem but the gatekeepers didn’t allow it to be. But what a jam!

As someone who typically hates a rap love song, I was dreading that category. But I was pleasantly surprised to see Rouge choose No Strings. I’ve always thought the song had some immaturity to it but in this context, it felt like a subversion of romantic tropes. I really enjoyed that.

I also thoroughly enjoyed their selections of unheard tracks. Moozlie played a Zoocci Coke Dope-produced low-fi jam called I’m A Star. Then Rouge finished the battle with WhatsApp Group featuring Sarkodie, produced by Maenmajor. It’s a lower tempo than she’s known to put out but as a follow up to One By One, this super catchy song is in good company.

With a South African Hip Hop Award atop a speaker behind her, Moozlie’s moody mauve lighting gave her an edge that made it clear that she took the music and the aesthetics seriously. Rouge sat in a well-lit living room and behind her was a sparkling Christmas tree that made the viewers christen her “Mama Xmas” in the comments section.

Rouge is undoubtedly one of the best post-2010 emcees to bless the mic in this country. I named her debut album, The New Era Sessions, my favourite offering of 2017 on a list that also included albums from AKA and Anatii, The Amandla Freedom Ensemble, Shane Eagle and Johnny Cradle. So I’m aware that she doesn’t pay much attention to aesthetics because her music speaks for itself. Some may even say I am biased.

So I expected her song choices to be reminders of her lyrical lore. What I wasn’t expecting was the amount of times she started her sentences with “bitch” or told Moozlie to “voetsek”.

Most glaring was that the difference between this battle and the local producers one was the latter revealed two kids who seem to like and support each other. The former, on the other hand, felt, in some parts, like a shadefest from Rouge. I understand competitive sports – I play 30 Seconds, I get it.

But for people who claim to be friends, I thought some of Rouge’s banter between bangers was breakdancing on rude. At one point, Rouge clowned Moozlie for having the “one” SAHHA pyramid in the room. At another, Rouge claimed she didn’t know what certain categories mean. Maybe Moozlie didn’t communicate them and Rouge felt blindsided. Angazi. But upon discovering one of the categories centres on lyricism, she heatedly exclaimed: “we win awards off these verses, do NOT do that again.”

Listen, it’s not like Moozlie was throwing Rouge rainbows and butterflies. She puffed out her metaphoric chest and consistently dared Rouge to truly bring it. She was a troll through and through. But she wasn’t vulgar or disparaging.

Ah, Helly, you’re too sensitive. This is hip hop, baby.

I can already hear some of you putting my opinion in the Old Head box and I’m fine with that. I just hit the lick with the box. Had to put the stick in the box. Hm. You’ll have to excuse me if I’m coming off antisocial but that exchange was strange to me because battles are so communal and the missiles are in the music, not regular conversation.

That aside, this battle was incredibly entertaining and I bet most of the 600+ people who watched feel the same. Speaking of bets, who was your money on?

Tags: MoozlieRap BattleRouge
Previous
On: The #CottonFest2020 Bowling Invitational
Next
A Year Later: 5 Things I’ve Learned Since Quitting My Job